Architects, engineers, builders and other professionals within the built environment have been working under the banner of progressive sustainability for some time now – but we have done just that: sustained and maintained the status quo. The construction industry now desperately needs to achieve net zero.

Visit our portfolio to see Architecture for London’s recent work, or contact us on 020 3637 4236 to discuss your project.

The UK Government instituted the Climate Change act in 2008, placing a proverbial stake in the ground as a marker of Britain’s intent to reduce greenhouse gas emissions by at least 100% of 1990 levels by 2050. Eleven years later in May 2019, the Government moved to pass a motion declaring an ‘environment and climate emergency’.

It’s important to ask why we have had to double down on the alarmist rhetoric. At the personal level there has been a shift, everyone wanting to do their little bit to contribute. Taking a broader view however, we see that business and industry haven’t yet developed the bias for action that is required.

Apart from the energy sector, which accounts for the majority of the 40% drop in UK emissions, other industries have been adopting new methodologies at a glacial pace – the built environment, agriculture and transport still have output levels comparable to 1990.

How can we address construction emissions?

The fact that the construction, operation and maintenance of the built environment account for 45% of total UK carbon emissions is seared into our collective consciousness. Worse still, 32% of landfill waste comes from the construction and demolition of buildings and 13% of products delivered to site are sent directly to landfill without having even being used.

The question is how we rectify this situation. If instead of a short-term ‘here-and-now’ approach we took a more preternatural look at our actions, what would our buildings look like?

To reverse the effect of years of depletion the rationalists’ approach would be to tackle all stages of the lifecycle at once – seemingly this is the goal of Architects Declare’s eleven action points. This essay acknowledges the importance of best practice in terms of operation, maintenance and decommissioning, however, if we are going to create a new future we need to lay the right foundations and that begins in construction. 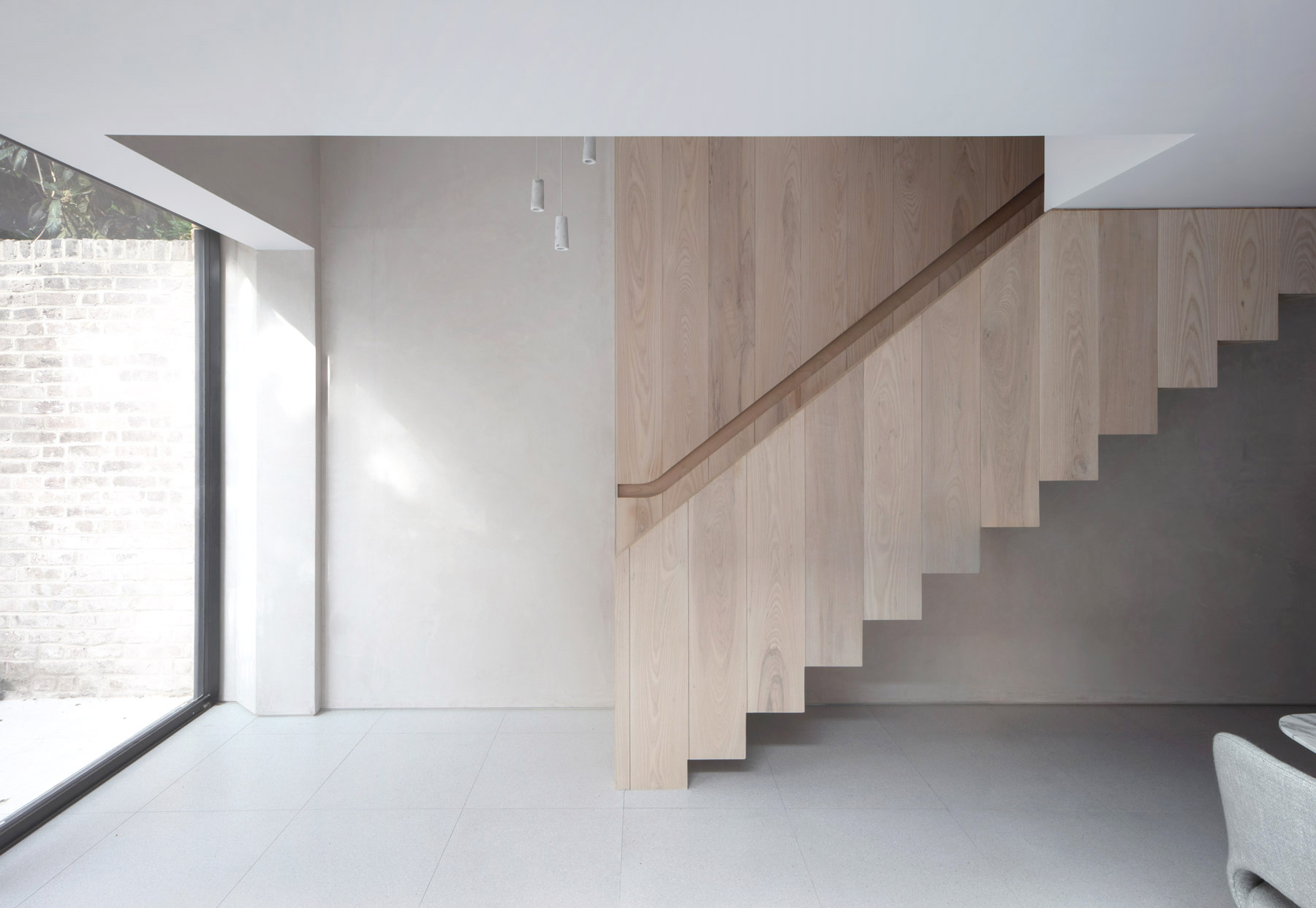 According to the UK Green Building Council 10% of total UK emissions are derived from the construction process, which may sound like nothing much to worry about, but 10% of 520 Mega-Tonnes is a big number.

Generally, up until building completion, the main sources of carbon are; extraction, manufacture and transportation of materials and on-site emissions. It is possible to carry on counting though; what about the carbon cost of repair and restoration? And when the building is no longer functionally useful, are the materials salvageable? Can they be recycled or if they are destined for landfill, what is that carbon cost?

Through better construction technology it is possible to lower carbon output at all stages of construction and after. A key question that has been posed to the signatories of the Architect’s Declare movement is: what materials will they be building with now they have this new imperative?

Hopefully, nothing too heavily reliant on steel. The iron ore needed has been much depleted by our historic industriousness, now turning to low-grade stocks, we need to extract even more than ever before. To obtain the raw component, miners must first remove a swathe of trees, part of our planet’s natural carbon sink, and take up a layer of earth, further contributing to soil erosion.

Efforts are now being made to lessen the impacts of concrete, with companies like Solidia unearthing new manufacturing techniques. Their new approach releases far less carbon dioxide using the sand and limestone as usual, but in equal parts. This mix is then heated to much lower temperature of around 1200°C. This approach decreases both sources of carbon dioxide, using less limestone and less fossil fuel.

Reading point No. 11 of the Architects Declare manifesto, lower carbon mightn’t be enough. According to the group architects are to “Minimise wasteful use of resources in architecture and urban planning, both in quantum and in detail”. With that detailed understanding of this complex problem, we might ask why use concrete if other materials are available.

Slowly but surely, timber construction is being embraced, with practices like Architecture for London, Waugh Thistleton and Groupwork + Amin Taha leading the way. Waugh Thistleton speak of the natural interplay between the carbon-negative structures and the needs of our environment, but also how every project they work on ends up being CLT because all the questions, and answers lead them there.

Barrets Grove by Taha and Lewes road by WT, prove that timber offers as much variety and intricacy as any other material. Architecture for London has two interesting CLT schemes on the drawing board: Aylesbury Housing, a rural cohousing scheme, and Melior Place, a mid-rise housing scheme in Southwark. 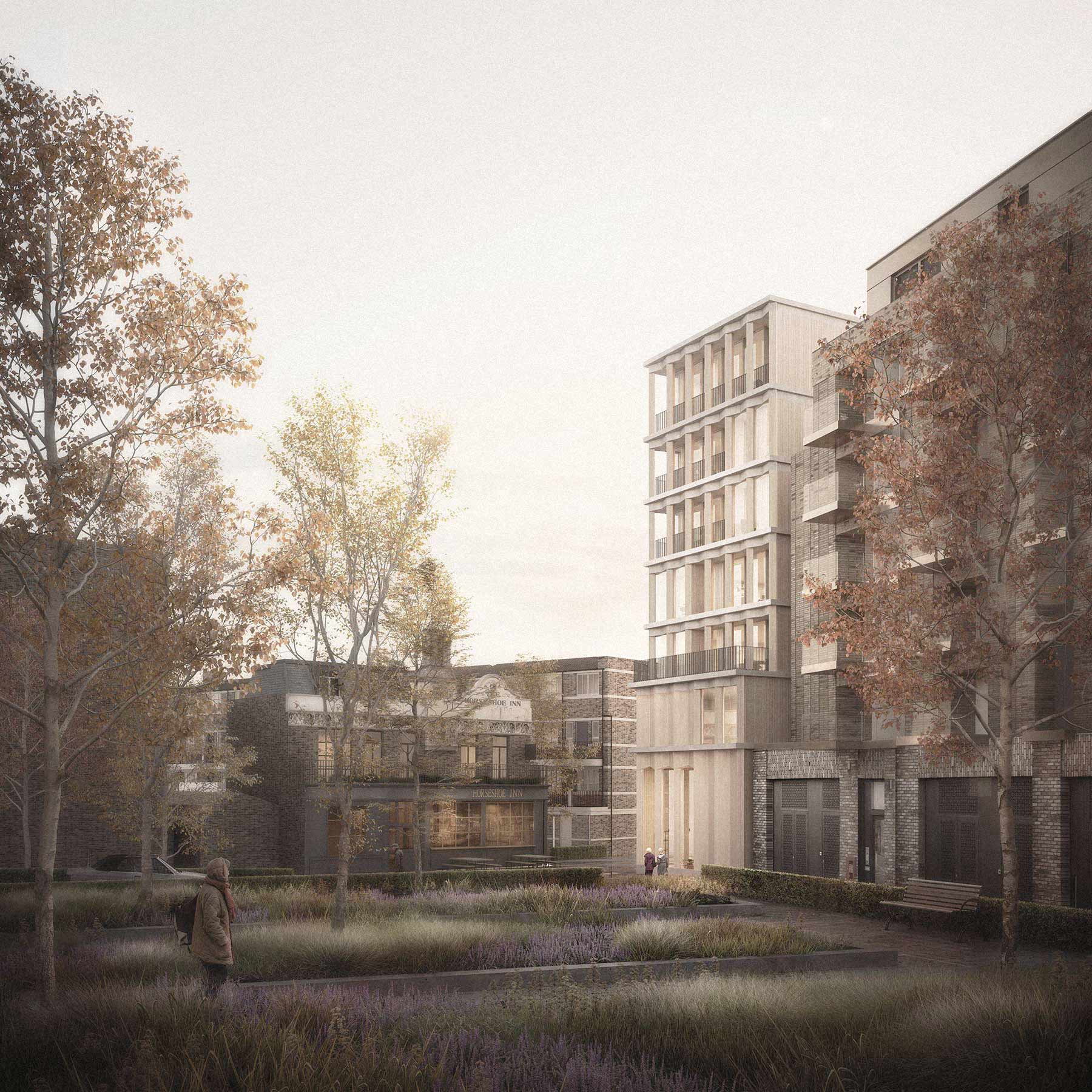 Melior Place housing in Southwark by Architecture for London

At Melior Place, CLT panels and glulam columns form the structure and facade of the building, with elevations composed of a repeating chevron detail and bevelled timber. Displaying a controlled response to both the need for high-quality amenity and elevational dynamics the façade opens up where the staggered terraces overlook the street.

When viewing the result of Architecture for London’s purist approach towards materiality, it is impossible to overlook the substantial proportions of the timber members. In fact, in his recent call to arms, Steve Webb of Webb Yates notes that “architects frequently disdain timber options […] because it is too chunky and steel sections are finer, slimmer”.

Despite this aesthetic constraint, both Melior place and Aylesbury Housing show how architects can begin to make use of their design thinking to introduce proportions and geometries specific to the qualities of timber.

In November 2018, in the aftermath of Grenfell, the government moved to prohibit combustible materials being used within the fabric of new housing schemes over 18m.

This anxiety, though understandable, remains despite convincing arguments about the benefits of CLT in the areas of; constructability, speed of housing delivery, carbon capture, fire and acoustic performance and embodied energy. Data from completed builds has shown that a standard dwelling constructed of CLT would have a carbon footprint of 19 tonnes of CO2, 2 tonnes less than if it were to be built from standard materials.

In terms of ongoing provision, it is worth noting that as long as timber forests are managed well, the raw material needed for CLT won’t run out in the same way as the ever depleting constituents of steel and concrete. Hypothetically, even if everything were to be built from CLT, in Austrian and German forests alone, where the majority of European timber comes from, trees have been calculated to grow at a rate that would produce enough raw material for the average three-bed dwelling every 20 seconds. 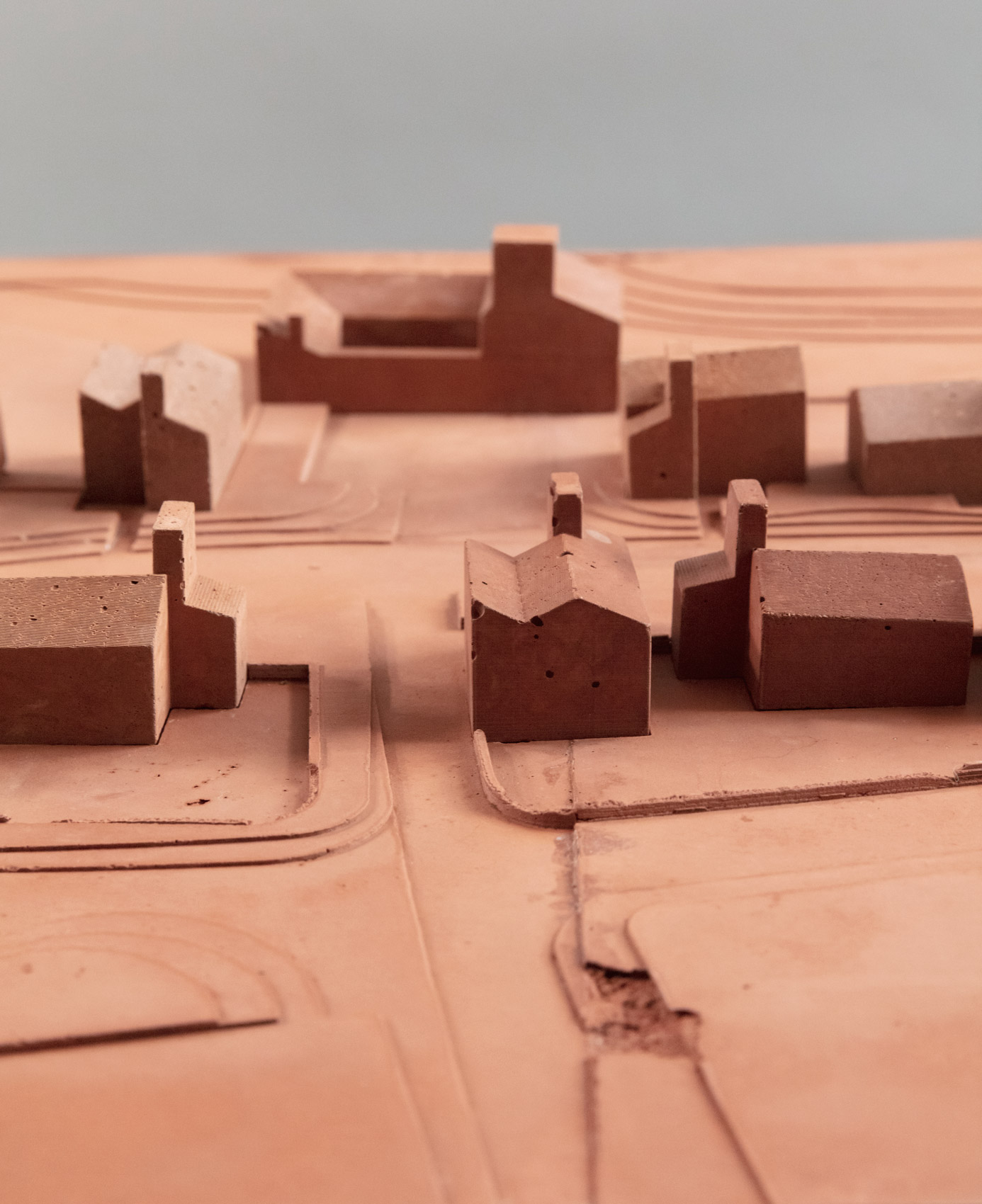 Aylesbury Cohousing proposed with cross-laminated timber by Architecture for London

So, it would seem that in CLT, we have the potential basis for the reversal of the environmental crisis that looms over us. But do we really though, or perhaps we can search further, after all 19 tonnes is still 19 tonnes. It’s far too easy to exceed the current benchmarks of LEED and BREEAM and be content with our achievements.

We will not achieve the goals we have set ourselves let alone a liveable future until we learn how to live within nature again, as we did in the times of our more ’primal’ worldview. That means driving down the tonnage per building to zero, and eventually moving toward what Michael Palwyn calls a ‘carbon positive’ mode of building: utilising materials that actively take carbon out of the atmosphere and designing buildings that generate more energy than they consume.

We must consider both energy in use and embodied energy

In fact, a recent study of 90 residential buildings that set out to determine the relationship between embodied energy and complete life-cycle energy usage; the proportion of embodied energy was highest for the ‘greenest buildings’, with figures of 74–100% in net-zero energy buildings. Flick through a few passive house publications and review one or two ‘green’ case studies and the prevalence of this methodology becomes clear: mineral wool and glass fibre insulation are seemingly the answer to every thermal question.

There are less intensive solutions already out there albeit with a slight premium. Wood fibre insulation, for example, is often overlooked in favour of its synthetic equivalents, as on the surface it doesn’t appear to perform as well. Beneath the surface however, it offers clear benefits in terms of embodied energy, carbon sequestration, thermal storage and breathability.

Looking beyond what we have now, materials are currently in development that perform as well, if not better than standard, synthetic components but with wholly natural components. For example, at Washington State University a research project has developed a plant-based insulation that works better than Styrofoam.

Again at the fringes of current practice the US based BioMason, and the Dutch company StoneCycling are toying around with bricks, attempting to reduce our reliance on traditional processes. Instead of heat treating clay in kilns at 2,000°C for several days, BioMason injects sand with microorganisms to initiate a process similar to the natural growth process of coral. Over a period of four days the brick moulds are irrigated by a nutrient-rich water feed, hardening the mix in readiness for construction.

StoneCycling have a different approach to minimising the emission impacts of brick. Plundering our seemingly endless supply of ‘junk’ that was once extracted, then used and discarded. At the moment their bricks are utilising a blend of 60% recycled content, but the aspiration is to move towards 100% recycled material – removing several tonnes of construction landfill with every project.

If we want to take advantage of the latent potential of building envelope to impact our current and ongoing carbon emissions, what will be required is a shift in mind-set. At some point, whether through force of legislation or verdict of nature we will have to do away with everything we have come to expect a building to look and feel like. Before things get to that point, those in the built environment need to become stronger advocates for choosing optimum performance rather than reworking the approach that ‘worked’ on the last job.

Clients will also need to be rather intrepid, actively seeking out ways that their buildings can contribute to the ecosystems that they sit within, and finding architects who are prepared and knowledgeable enough to deliver on their goals. Using some of the approaches discussed here, even a tried and tested construction approach such as CLT, will often produce challenges, mainly in regards to finance, but also regulations and the balance of risk: but at what point in history has massive change been easy.

Symbolic of the rate at which things are developing, the Government has not yet figured out where to place their carrot or sticks. As we wait for direction from above, at some point we will realise that true leadership in the construction industry comes from within, not the awards panellists, media or statutory bodies. Only once we have made this leap in our thinking will we start to see the construction sector move quickly towards the targets that at the moment seem like moon-shots.

How can we lower the embodied energy in our buildings?

We should strive to reduce quantities of high carbon materials like steel and concrete, instead opting for timber and natural stone.

Will a switch to timber construction deplete trees?

Even if everything were to be built from CLT, in Austrian and German forests alone, trees grow at a rate that would produce enough raw-material for the average three-bed dwelling every 20 seconds.

What can clients do?

Clients will need to integrate their sustainability goals from the outset as part of the briefing process to ensure that their architect is aligned with their ambition to deliver a low energy building.